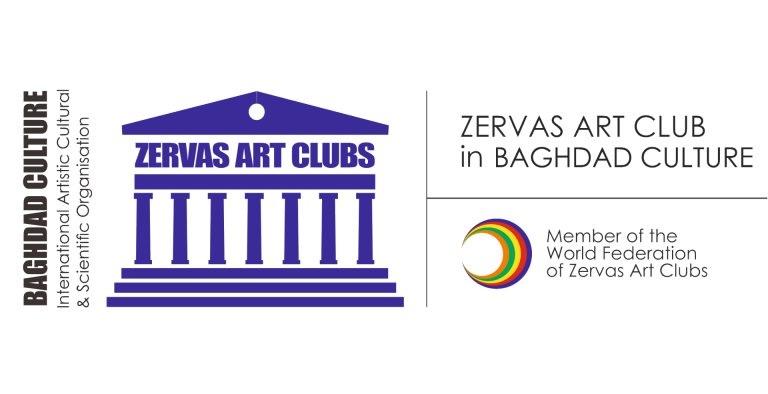 I dedicated myself to my country to raise the name of Iraq high. I take advantage of every minute of my time for my artistic and cultural future.

For me, art is in my blood; the drawing  frame, colors and the brushes are my friends,  with whom I discuss the stories of life. 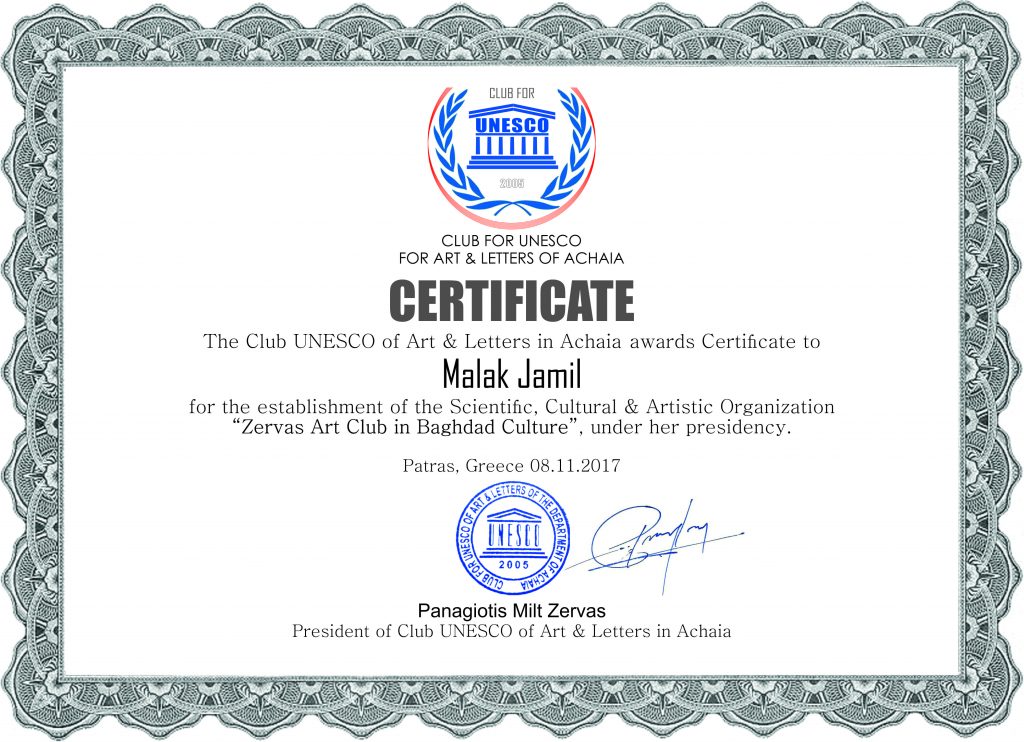 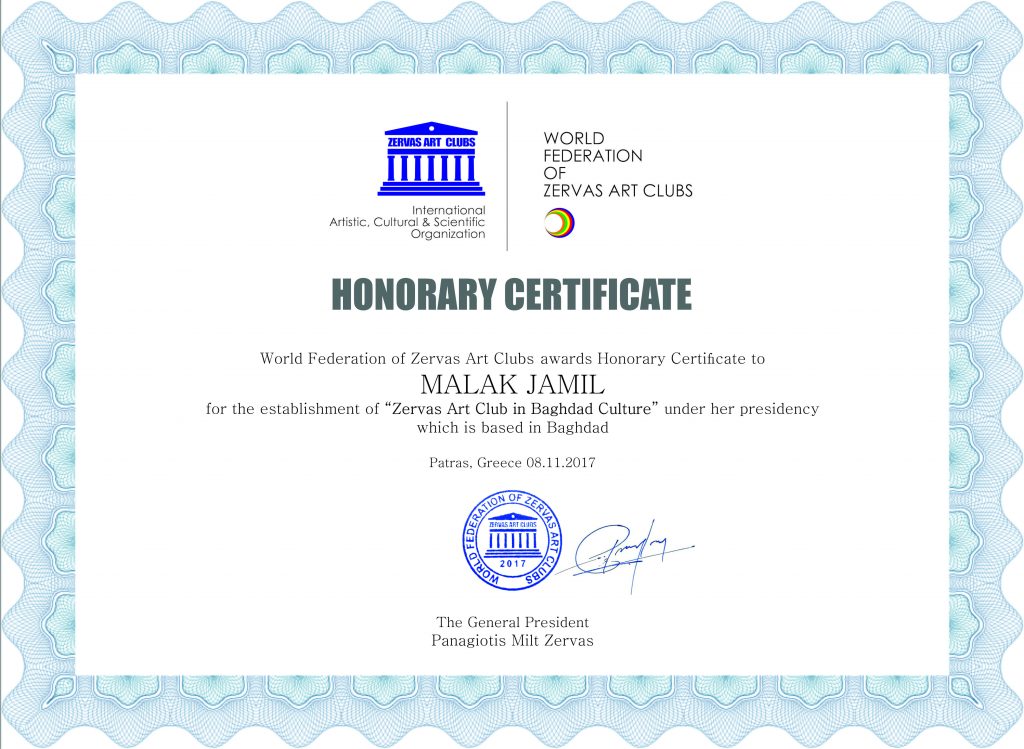 A 21 century “Babylonian” Artist tells UNAMI PIO how she empowers Iraqi women through her brush“Eve, oh Eve! Choose a man who does not walk out when he sees you sad, and puts up with your anger even if you are
stubborn…a man who loves you reasonably …just as you are” Meet Malak Jamil, Vice-President for the Fine Arts in the Iraqi Artistic Association and Activist fighting against gender-based violence. Eve; her artistic name, puts on many hats. She spoke to UNAMI PIO. UNAMI PIO: Malak, you have won several awards including an international one for creativity in 2010 at the Hurghada Festival, that must be a lot of hard work. How have you been able to reach such heights in your painting career?
Malak: “I dedicated myself to my country to raise the name of Iraq high. I take advantage of every minute of my time for my artistic and cultural future. For me, art is in my blood; the drawing frame, colors and the brushes are my friends, with whom I discuss the stories of life. Since I was a child, I will go on school trips to the ancient city of Babylon. I would stand before the Ishtar Gate, fascinated by its colors, designs and details, especially the “chamomile” flower, the paintings and sculptural works on the walls and the Lion of Babylon. When I returned, I will sit and draw them.”
“I participated in most school exhibitions and attended most of the painting exhibitions held inside and outside Iraq. I established Kahramana Gallery in 1994. Prominent artists such as Fa’eq Hassan, Ismael Al-Sheikhly, Saadi al-Kaabi,
Alaa Bashir and Naziha Salim have attended the gallery and given me their views, ideas and constructive criticism.”
For over three decades, Eve has been juggling her different hats by managing art galleries while serving as the Museum Director in the Ministry of Culture, and the Head of Kahramana Cultural Organization for Arts. In the midst of it all, she tells different stories.
UNAMI PIO: What pictures do you paint and what type of stories do you tell?
Malak: “In most of my own exhibitions and artistic works, I focus on the role of women in life and their role in the
civilizations of Mesopotamia. My style is inspired by ancient myths in Mesopotamia and the Sumerian, Akkadian, Babylonian and Assyrian civilizations. I was influenced by the Arts of Mesopotamia and the stories of the ‘One Thousand and One Nights’ (Arabian Nights), and this became obvious in my works.

I had an exhibition entitled Women of the civilizations of Mesopotamia 2011,’ where I highlighted most of the women who ruled Iraq and had honorable roles such as: Shubad (Puabi), Semiramis, Queen Zokuto.”“… Iraqi women throughout the ages have been queens, ambassadors, scholars, artists, and successful specialists in the domain of law, medicine, and engineering. also look at figures in the current era; notably the architect Zaha Hadid. The exhibition was shown in six states in the United States, at the invitation of the Iraqi Embassy and the Iraqi Cultural Center in Washington.”“In my exhibition, I address the personal life of Eve; her choices, love, waiting, treachery and manipulation, patience and faith: “Eve, oh Eve, choose a man who does not walk out when he sees you sad, and puts up with your anger even if you are stubborn. Choose a man who loves you reasonably and sails crazily in the sea of your love. An honorable gentleman, a man of weight among his people, a man who loves you just as you are, seeing all the women of earth in you, a man full of light and belief, who believes that no woman but you will be his woman, religiously, legally and lovingly.”
UNAMI PIO: Tell me about the Queens of Babylon
Malak: “Iraq has been ruled by many queens, each leaving a certain legacy in the history of Babylon and its inhabitants. One of the most prominent queens and most famous name is Queen Semiramis; who honorably represented the Iraqi civilization with lots of achievements during her reign. Semiramis (Smurmat), a Babylonian by birth, was known for her beauty and wisdom. Regarded as the ‘most beautiful queen in the east’ with power, severity and strength; she became a symbol of the glories of Mesopotamia’s
civilization.”
UNAMI PIO: How do you support other women who need to develop their art skills?
Malak: “Firstly, through cultural programmes; this includes identifying young talents, through poetic and literary
competitions, among girls between the ages of 10 to 18 years, from less privilege homes in remote areas. Secondly, I
organize awareness campaigns on the topics of economic empowerment and educate them on self-esteem; not to
beg for money, but to look for ways to beat the challenges of poverty and negative exploitation. Thirdly, in coordination with some TV channels, we organize art exhibitions for female artists, as well as cultural and artistic symposia and fashion hows to develop a good taste and enjoy the beauty of colors. We produced TV shows such as Ishtar Show; the Iraqi costumes encyclopedia” When Malak is not wearing her artistic hat, she is putting on the one for activism; paying visits to secondary schools and conducting trainings for girls on folk crafts, while attracting
widows and divorcees through workshops to the art of sewing and designing. She also conducts workshops on
psychological support and mitigation of war effect on children, human rights exhibition and workshops on peace
and conflict resolutions.
———————————
Story by Celia Thompson and Thura Kareem (UNAMI PIO)
Translated from Arabic to English by Mohammed Altaheri
(UNAMI PIO)
Additional Info
Agency:UNAMI