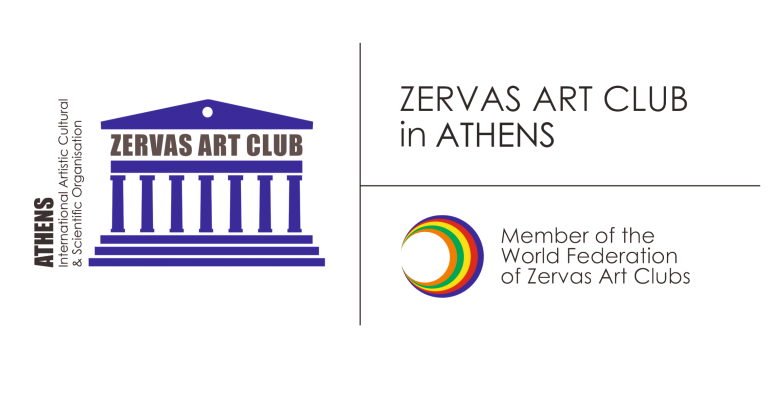 of Zervas Art Club in Athens

GENERAL SECRETARY OF THE WORLD FEDERATION OF ZERVAS ART CLUBS 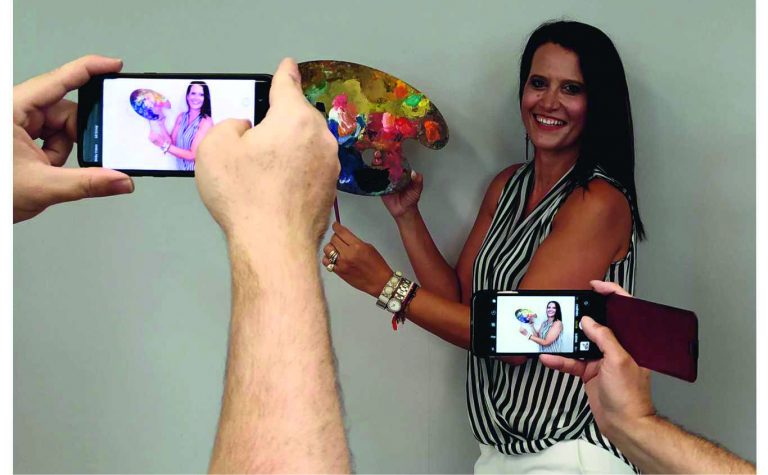 First of all I want to thank from my heart and congratulate the prestigious presidents of Zervas Art Clubs around the world who are the basis of the organization.

The purpose of the Zervas Art Clubs that are set up daily is – through its actions – to awaken uplifted societies and consciences and to add a new “Culture Policy” focusing on the people of every country, culture, religion and mentality.

The value table is on a zero basis and the values begin – anyway – to be redefined as a consequence of the multi-crisis in every level. The judgment of values has come as a logical result to confirm the failure of education, visions, politics and, more generally, the systems of administration or demagogy, but also of the doctrines generally.

Culture was and is the nucleus where every virtual or real artistic, social, political or religious system is based and hosted. It is now the political solution and the dynamic headline in rebuilding the list of values.

Art, on the other hand, is the primary factor of civilization. Art is preceded by everything, and it is a irrational answer but also a deeper approach to the mystery of human existence. Culture is slowly following it so that with effort and blood it will be possible to create the new table, which will be characterized by the everlasting values of a true reality.

International Artistic, Cultural and Scientific Organization “World Federation of Zervas Art Clubs” invites and selects dynamic and distinguished presidents for the establishment of Zervas Art Clubs around the world, presenting a pioneering program in every country and city. 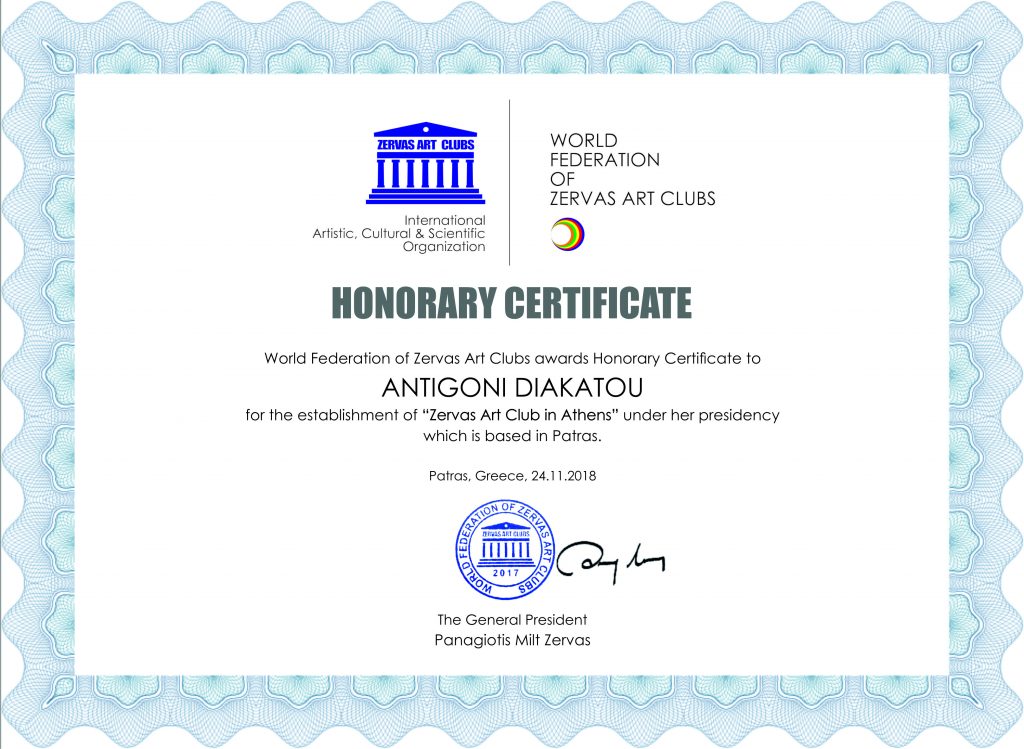 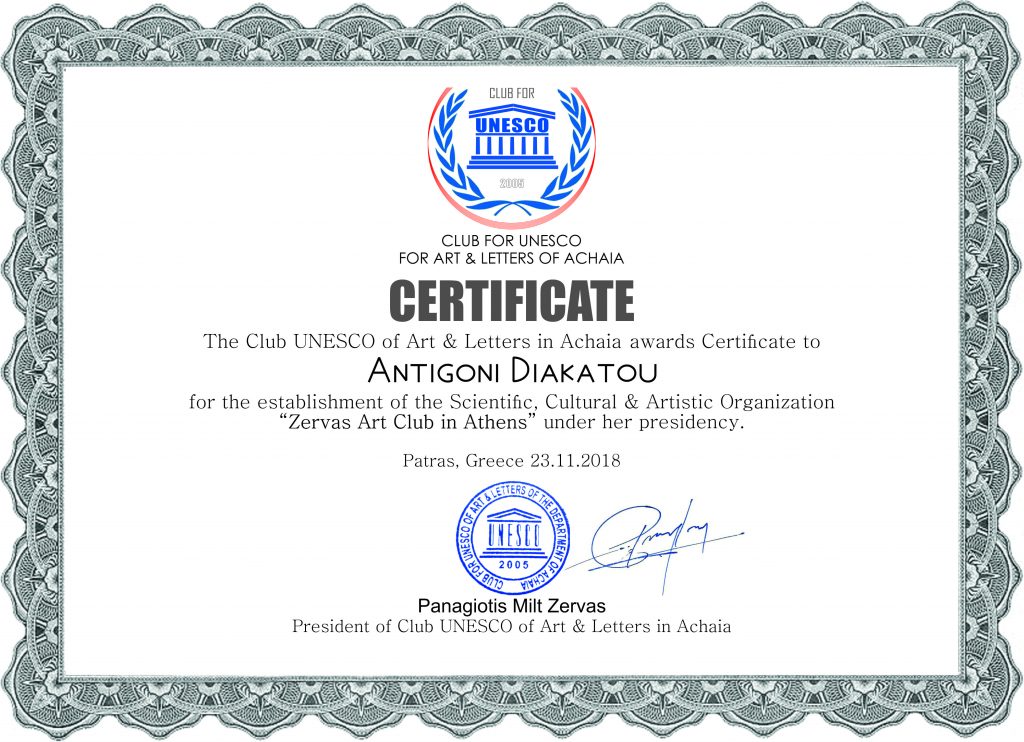 The International painting Symposium were organized since 2002. “Patras means homelands” in patras started to communicate different cultures, different pallets, different religions and different political beliefs, the axis was art. Communication is based on art not on speech.

The dialogue that opens with art from country to country, from artist to artist is based on the language of art that is primordial and native language to the human kind irrespective the origin.  The point of the symposium is the intervention of art as axis of communication between people and countries not noticing the similarities and differences .Also the Symposiums simulate with art to revolutionize complacent societies and consciences.

The objective of the symposium is elastic and multilateral, the important point is that the artists from any country all over the world have the ambition and dream to visit Greece and taste parts of the ancient and Modern Greek culture. Also, a history is created that can’t be performed with words or with art critics but with the artworks that are added to the collection of zervas that consists today up to 3000 artworks.

The remarkable artworks that create the artist from 80 countries are exposed in big and important exhibitions that are hosted in different countries.  The organization and copyrights belong to Zervas Art.  The decision to launch the Symposiums comes from the personalize need for artistic action without borders and simultaneously repealing the cultural boundaries. The organization started with the belief that art is the communication language between people and countries despite the similarities and differences.

Also I believe that art is an integral part of the human dignity. It was a thought and an argument that found immediately the support of big international organizations as UNO, Unesco,  Action Aid, Green Peace, MSF(Doctors without Borders), Universities and Academies of fine arts, Ministries in Greece and other countries and Embassies of the countries that participate.  Before the symposiums my life was very lonely in a very narrow context… the journey had to begin.

Than all change… everything!  In general the results and success of the International Painting Symposium overcome in much my expectations, a fact that cause new and important requirements and conditions needed for the continuous and success of the institution.   My personal expectations were and are still undefined. Today, after 12 years I can’t say something about personal expectations… I don’t know… The subject with the International Painting Symposium is elastic… but I never expected anything more and actually happened… a big international workshop of art with an amazing communication… and creation. The coexistence of the different!  I think the communication between diversities it’s a bigger pleaser than the best wine!

I started 1999 approaching art with purely philosophical intention. Art is replacing philosophy and an artist replace philosopher.  I love an artwork when it surprises me and when it gave me answers to something I didn’t ask.  The philosophic researches and life itself indicated and proofed to me that art is the end and the beginning of everything…

My preference in Painting is to meet soul and honesty on the canvas.  Everyday something changes… every year… every decade!  I return to all I loved at first and sometimes I travel to somewhere i didn’t love yet  Every Artwork enchants me… but not all is art.  Every artwork that I consider important I perceive it like a love affair, of course it change me and adds in my character and my emotional world. Thousand artworks were created in front of my eyes and for sure some of them may remain unforgettable.

I believe that art is something that comes uninvited in your mind, your heart, your memory and in your life.  Yes! I remember every detail of all the artworks that I loved… I will remember them forever!  I don’t want to talk about art, because it constantly refutes me.  I know how the first scripture was for the human kind. The primary need for the first human.  The other forms of scripture followed after thousand years. Art was the beginning and the occasion for all things. What will the history of human kind be without art? What would life be… Would there be life?  The artworks on the caves from the prehistoric period are modern and important. The tradition begins millions of years ago.

The artists lived with terms and doctrines for many periods of the history. But I believe that art is not conscripted and don’t follow the rules. The language of art has for sure grammar and syntax… but I can’t consider it as a term… the knowledge is necessary. The talent is innate, grammar can be learned… No, art doesn’t obey and have no limits… it wouldn’t be art!  The leadership and postmodern art may surprise or shock a viewer but this is an important part of art, to awake and revolutionize the viewer, even if it shocks them.  Sure, many call themselves artists…  There is nothing worse than a bad artwork…